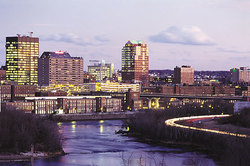 Amherst, New Hampshire is home to just over 11,000 residents and is located directly between Manchester and Nashua.  Amherst is home to the Amherst Village, which is located in the center of town and has many well preserved historic buildings an homes.  The Town Commons, established in the 18th century, were originally used for militia training, grazing of livestock and at times public punishment, but are now a focal point where many community events such as the Forth of July celebration, the Christmas Tree lighting, and concerts are held throughout the year. Amherst is also know for their highly rated school district, and outdoor points of interest such as Joe English Reservation, Ponemah Bog Wildlife Sanctuary, and Baboosic Lake. 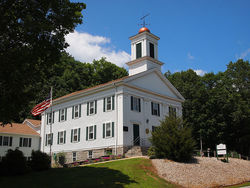 Merrimack, New Hampshire is the ninth-largest municipality in New Hampshire based on a population of a little over 25,000 people.  Merrimack is popular for it's access to highways for easy commuting as well as it's proximity to Massachusetts.  It is home to The Anheuser-Busch Brewery, one of only six across the country. They offer tours and events and are home to the world famous Clydesdales.  Merrimack is also home to The Merrimack Premium Outlets which offers tax-free shopping at over 100 stores. 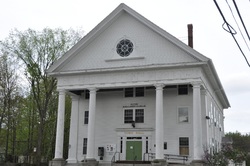 Bedford New Hampshire is only 50 miles from Boston, and viewed as an upscale residential town with a population of approximately 22,000. Bedford has two major highways running through it, Route 101 and the Everett Turnpike making it ideal for commuting. Before has a highly regarded school system and is in close proximity to several colleges. There are also several major retailers such as Target, Walmart, Whole Foods, Lowes, and many more located in Bedford.  Bedford is also home to Dean Kamen, the inventor of the Segway! 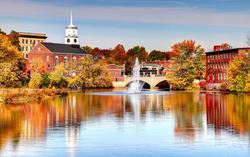 Nashua, New Hampshire is home to over 85,000 residents, making it the second largest city in New Hampshire.  This vibrant community is situated along the Merrimack River and is just 45 minutes from Boston, and 30 minutes from the New Hampshire Seacoast. It has become popular with residents commuting to Massachusetts due to it's proximity to the Massachusetts border, and well as it's easy access to highways.  Nashua has the distinction of being the only city to twice be named by Money Magazine's annual survey (1987 & 1998) as the Best Place To Live In America. 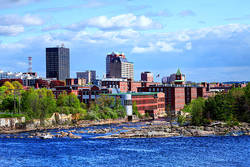 Manchester, New Hampshire,  is the largest and most populous city in Northern New England. It is known as "The Queen City" because it's New Hampshire's largest city, but not the state capital. Manchester is located in south-central New Hampshire along the Merrimack River, and offers several major thoroughfares such as I-93, I-293, Route 3, and New Hampshire State Highways 28, 101 an 114, making it great for commuting. Manchester is located just 20 miles from the Massachusetts border and only 58 miles from Boston, and is also home to the Manchester-Boston Regional Airport. Manchester also offers many cultural institutions and landmarks such as The Currier Museum of Art which is one of the country's finest smaller art museums, and The Palace Theatre which is the home of the The New Hampshire Symphony Orchestra as well as performances such as concerts, comedy acts, and magicians. The SNHU Arena is a 10,000+ seat indoor arena which hosts concerts, sporting events, comedy shows, and many other events.  Manchester is also home to many professional sports teams such as The Fisher Cats baseball team, The Manchester Monarchs hockey team, and the New Hampshire Phantoms soccer team. 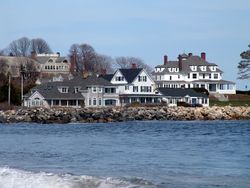 The New Hampshire Seacoast Region is made up of eighteen miles of shoreline along the Atlantic Ocean and boast towns such as Hampton, North Hampton, Portsmouth, Seabrook, Rye, and New Castle.

Hampton, New Hampshire is home to Hampton Beach, which is a family beach with activities such as the Band Shell which hosts free concerts and fireworks, The Casino Ballroom which hosts top national entertainers, and many annual events including the Sand-Sculpting Contest, and the Seafood Festival.

Portsmouth is a historic port city filled with cobblestoned streets, and a downtown filled with shops and restaurants overlooking the harbor.  Portsmouth is home to Prescott Park, which is a waterfront park, as well as Strawbery Banke Museum, which is a living history museum describing everyday life from the 1600's - 1950's.  Portsmouth is also home to The Portsmouth International Airport at Pease, which was formerly Pease Air Force Base.

Rye Beach has the historical distinction of being the site of the state's first settlement in 1623. Rye is home to great beaches such as Jenness State Beach, Wallis Sands State Beach and Odiorne Pointe, which is the largest undeveloped stretch of shore in New Hampshire.

New Castle is the smallest and easternmost town in New Hampshire. It sits on 500 acres and is composed entirely of islands.  New Castle has slightly more than 1,000 residents and is home to the historic Wentworth By The Sea Hotel, a Coast Guard Station, and the UNH Marine Research Laboratory. 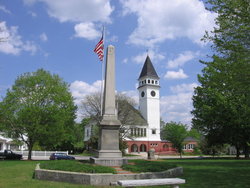 Hollis, New Hampshire is a town of only about 7,200 residents is rapidly changing from a mixed-use farm community to a bedroom community due to it's close proximity to the Massachusetts border.  Hollis is known for it's apple orchards, as well as corn, pumpkins, and other vegetables.  Hollis also has a number of town traditions and celebrations such as The Hollis Strawberry Festival, The Hollis Apple Festival and the annual Old Home Days Celebration.  The Hollis town center is listed in the National Register of Historic Places as The Hollis Village Historic District. 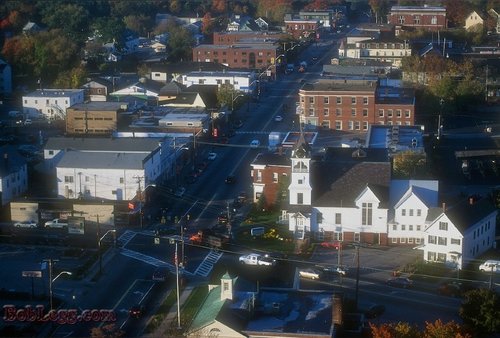 Derry, New Hampshire is the fourth most populous community in New Hampshire, even though it is a town. Derry's nickname is "Space town" due to the fact that Derry is the birthplace of Alan Shepard, the first astronaut from the United States in space. Derry was also for a time, the home of Robert Frost and his family.  Derry is one of the few towns in New Hampshire that still has a main street.  Derry has developed a lot over the past couple of decades due in part to it's proximity to interstate 93. Although it has grown, it still retains much of the atmosphere of the New England village that it once was. 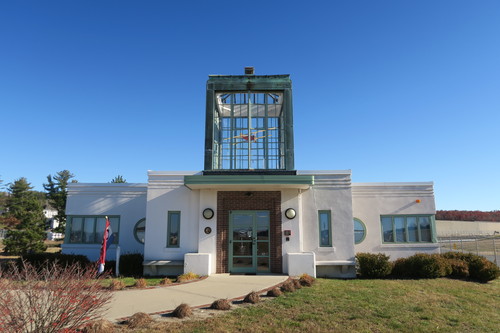 Londonderry New Hampshire sits between Manchester, too the north, and Derry, to the east. Londonderry is known for it's apple orchards.  Stony field Farm is headquartered in Londonderry, as well as part of The Manchester-Boston Regional Airport.  Londonderry has grown steadily over the past few decades due to it's highly rated public schools, as well as it's access to interstate 93 and state routes 28, 102, and 128 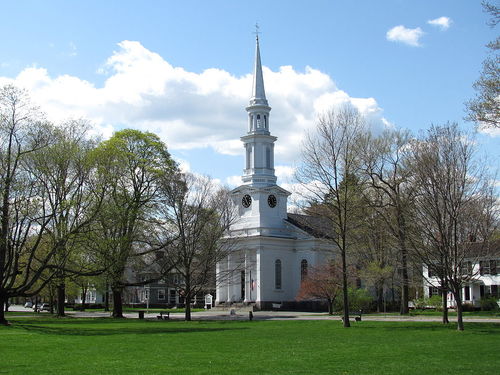 Massachusetts is the most populous state in New England.  Many people are drawn to Massachusetts to live and work as Massachusetts is a global leader in biotechnology, engineering, higher education, finance, and maritime trade.  Over 80% of the Massachusetts population resides in the greater Boston area.  Northern Massachusetts offers everything from coastal towns to historic sites, state parks, and even skiing. There are many historic sites to visit from the Salem Witch Museum, to Old Sturbridge Village, to American Revolution Museums, and much more.  The North Shore is home to many beaches and state parks and offers many activities such as fishing and whale watching. 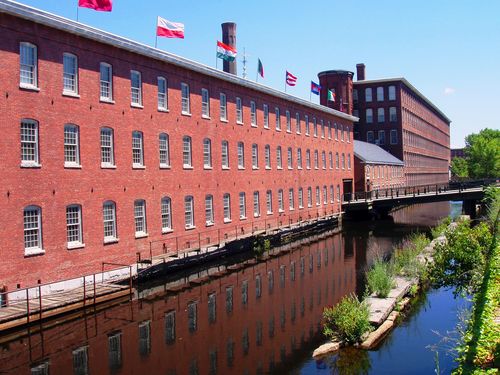 The Greater Lowell Metropolitan Area lies in Northern Middlesex County Massachusetts.  The area is home to cities and towns such as Lowell, Billerica, Chelmsford, Dracut, Westford, Tyngesborough, and Tewksbury.  Due to it's proximity to The Merrimack River, The Concord River, and The Shawsheen River, much of the area was originally known for it's many mills and factories.  The major employers in The Greater Lowell Metropolitan Area today are high technology companies, defense contractors, as well as health, and retail sectors.  The Greater Lowell Technical High School, The University of Massachusetts Lowell, and Middlesex Community College are just a few of the larger schools throughout the area.  Greater Lowell's close proximity to downtown Boston (approximately 25 miles), as well as several MBTA commuter stops, make the areas towns popular with Boston commuters.  There are also many major highways and interstates running through the area such as Interstate 95, Interstate 495, Massachusetts Route 128, and Route 3.  The area is also home to many museums, historical sites, minor league sports teams, parks, and concert arenas. 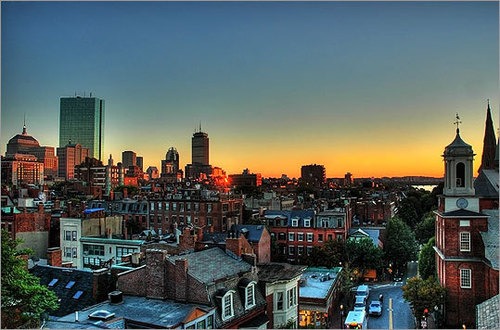 Northern Essex County Massachusetts borders New Hampshire to the north and is home to cities and towns such as Lawrence, Methuen, Haverhill, Andover, North Andover, and Bedford.  NorthearnNorthern Essex County offers easy access to several major highways and interstates, as well as several bus lines and the MBTA commuter rail. There is also close proximity to airports such as Lawrence Airport, Manchester-Boston Regional Airport, and Boston's Logan Airport.  Many of the cities and towns in Northern Essex county have seen a revitalization of what were once factories and mills, that have now been converted into loft style apartments and condominiums. 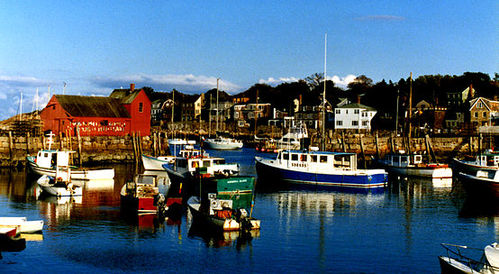 There is no defined area that makes up the North Shore, however it is commonly considered to be the coastal area between Boston and New Hampshire.  The North Shore is made up of marshes, wetlands, natural harbors, and several beaches.  The North Shore is historically viewed as a wealthy, exclusive collection of towns and fishing villages, but it also contains many working class cities.  Some of the towns that make up The North Shore are Salem, Gloucester, Beverly, Rockport, Salisbury, Newburyport, Ipswich, Essex, Marblehead, and Revere. The North Shore has been the setting for several movies over the years including Shutter Island, Manchester by the Sea, and The Perfect Storm.  The North Shore also contains a large amount of history throughout the area.  Beverly was home to John Updike, Gloucester was America's first fishing community, Salem was the location of the Salem Witch Trials, and Newburyport was the birthplace of the United States Coast Guard, just to name a few.  Some sites of interest at the North Shore are The Peabody Essex Museum, The Salem Witch Museum, Newburyport's Historic District, The North Shore Music Theatre, and The Rockport and Gloucester Seaports. 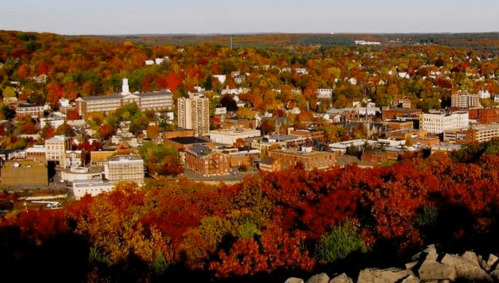